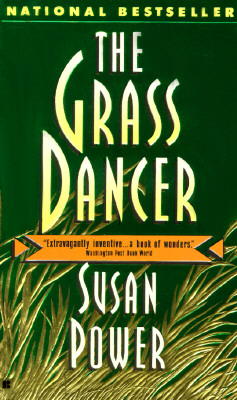 Email or call for price. Handling fee may apply.

One of my favorite books! Set on a North Dakota reservation, Susan Powers moves her story through three generations in the Dakota Sioux. Powers' starts the story at present day in 1982 and moves backwards to the very beginning of the story in 1864. Throughout the story, readers are met with magical realism and beautiful lyricism.

— Jami H. -- Loyalty Program Coordinator
Inspired by the lore of her Native American heritage, this critically-acclaimed novel from Susan Power—an enrolled member of the Standing Rock Sioux tribe—weaves the stories of the old and the young, of broken families, romantic rivals, men and women in love and at war...

Set on a North Dakota reservation, The Grass Dancer reveals the harsh price of unfulfilled longings and the healing power of mystery and hope. Rich with drama and infused with the magic of the everyday, it takes readers on a journey through both past and present—in a tale as resonant and haunting as an ancestor's memory, and as promising as a child's dream.

WINNER OF THE ERNEST HEMINGWAY FOUNDATION AWARD FOR FIRST FICTION
Susan Power is an enrolled member of the Standing Rock Sioux tribe and a native Chicagoan. She received an A.B. from Harvard/Radcliffe, a J.D. from Harvard Law School, and an M.F.A. from the Iowa Writers' Workshop. Her short fiction has been published in Atlantic Monthly, Paris Review, Voice Literary Supplement, Ploughshares, Story, and The Best American Short Stories 1993.
"Captivating...a healing vision that goes to the core of our humanity."—New York Times Book Review

"Stunning...Power steeps us in the traditions and culture of contemporary Indian life."—San Francisco Chronicle

"A wild river of a book. Susan Power writes with a headlong energy and a force that are nothing less than thrilling."—Louise Erdich

"Pure and potent magic, with storytelling that encircles you like wisps of tribal ghosts."—Amy Tan