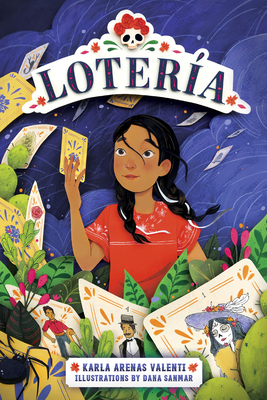 
On Our Shelves Now
The turn of a card could change your destiny in this captivating middle grade adventure based on the Lotería card game and perfect for fans of Coco. While searching for her missing cousin, a young girl is transported to a mythical kingdom, becoming entangled in a perilous game of chance.

In the hottest hour of the hottest day of the year, a fateful wind blows into Oaxaca City. It whistles down cobbled streets and rustles the jacaranda trees before slipping into the window of an eleven-year-old girl named Clara. Unbeknownst to her, Clara has been marked for la Lotería.

Life and Death deal the Lotería cards but once a year, and the stakes could not be higher. Every card reveals a new twist in Clara’s fate—a scorpion, an arrow, a blood-red rose. If Life wins, Clara will live to a ripe old age. If Death prevails, she’ll flicker out like a candle.

But Clara knows none of this. All she knows is that her young cousin Esteban has vanished, and she’ll do whatever it takes to save him, traveling to the mythical Kingdom of Las Pozas, where every action has a price, and every choice has consequences. And though it seems her fate is sealed, Clara just might have what it takes to shatter the game and choose a new path.

Karla Arenas Valenti weaves an adventure steeped in magic and mythology—gorgeously illustrated by Dana Sanmar—exploring the notion of free will in a world where fate holds all the cards.
Karla Arenas Valenti writes stories for and about kids, taking readers on journeys steeped in magical realism and philosophical questions. Her storytelling is heavily influenced by her Mexican heritage and layered with ideas and concepts she's picked up in her many travels around the world. She currently resides in the Chicagoland area with her husband and three kids, two cats, and hundreds of books. Karla writes picture books (she is the creator of the "My Super Science Heroes" series). Loteria is her debut middle-grade novel.

Dana Sanmar is a Colombian illustrator and graphic designer currently established in Atlanta, USA. Her love for illustration started from a early age due to her parents' love for books. And her early exposure to arts and crafts by her mother nourished her love for creating things by hand, while her dad showed her how to work with different materials and the importance of being resourceful. Following these influences, she got a B.F.A in Graphic Design in her home country. She recently graduated from her M.F.A in Illustration at the Savannah College of Art and Design and currently works a a freelance Illustrator.
"A magical, philosophical tale rooted in Mexican lore that will hold readers from beginning to end with its verdant language and setting.” —School Library Journal, starred review

"Clara’s unexpected decisions lead to the story’s heart: “Even when you have no choice about what has happened to you, you can still decide what you’re going to do about it.” The tale is a scaffolding for this debate, and what a lush, verdant scaffolding it is.” —The Horn Book, starred review

"Both worlds, mortal and magical, are vibrant and gloriously textured, grounded by Sanmar’s simple, inviting grayscale illustrations.” —The Bulletin

“An enchanting story, rich with riddles, fantastic creatures, mythical lands, and guided by the magic of hope.” —Aida Salazar, award-winning author of Land of Cranes

“I clung to every word of Lotería, never wanting this captivating novel to end. Brave Clara will live forever in my heart.” —Jennifer A. Nielsen, New York Times bestselling author