US of AA: How the Twelve Steps Hijacked the Science of Alcoholism (Hardcover) 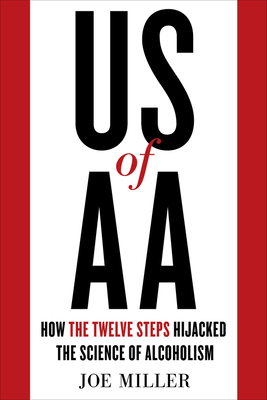 In the aftermath of Prohibition, America’s top scientists joined forces with AA members and put their clout behind a campaign to convince the nation that alcoholism is a disease. They had no proof, but they hoped to find it once research money came pouring in. The campaign spanned decades, and from it grew a multimillion-dollar treatment industry and a new government agency devoted to alcoholism.
But scientists’ research showed that problem drinking is not a singular disease but a complex phenomenon requiring an array of strategies. There’s less scientific evidence for the effectiveness of AA than there is for most other treatments, including self-enforced moderation, therapy and counseling, and targeted medications; AA’s own surveys show that it doesn’t work for the overwhelming majority of problem drinkers.
Five years in the making, Joe Miller’s brilliant, in-depth investigative reporting into the history, politics, and science of alcoholism shows exactly how AA became our nation’s de facto treatment policy, even as evidence accumulated for more effective remedies—and how, as a result, those who suffer the most often go untreated. US of AA is a character-driven, beautifully written exposé, full of secrecy, irony, liquor industry money, the shrillest of scare tactics, and, at its center, a grand deception. In the tradition of Crazy by Pete Earley and David Goldhill’s Catastrophic Care, US of AA shines a much-needed spotlight on the addiction treatment industry. It will forever change the way we think about the entire enterprise.

Joe Miller is an award-winning journalist and author, and an associate professor of English at Columbus State University in Georgia. His first book, Cross-X: The Amazing True Story of How the Most Unlikely Team from the Most Unlikely of Places Overcame Staggering Obstacles at Home and at School to Challenge the Debate Community on Race, Power, and Education, was selected as one of the best books of the year by the Chicago Tribune, the Kansas City Star, and Publishers Weekly.

"Joe Miller has the courage to tell a raw and honest story, one that he then backs up with impeccable research and storytelling. As our society is waking up to the incredible death toll of alcohol and alcoholism, US of AA is a vital book that delves into the history of where we are today and by doing so provides hope and foundation for the future." –Annie Grace, author of This Naked Mind: Control Alcohol, Find Freedom, Discover Happiness & Change Your Life

"Joe Miller has faced his own demons. Now he dives into the world of Alcoholics Anonymous and asks the questions others do not dare: What if there are missteps in the Twelve Steps? What if AA—a program canonized by substance abusers, churches, and popular culture—does as much harm as good?" –John Archibald, Pulitzer Prize-winning columnist for AL.com

“A…provocative book that tells the story of how Alcoholics Anonymous grew into the gargantuan organization that we know today.”  --TheFix

"We should be skeptical of enthusiastic histories of AA and more ready to accept at face value critical histories such as Miller's." --Metapyschology.net