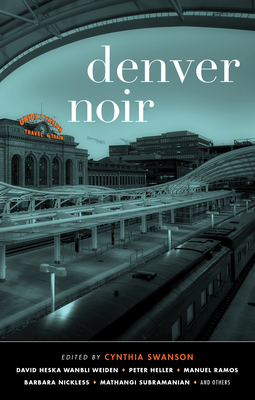 Denver enters the Noir Series arena with a wide range of mile-high misgivings and perils.

"Denver has a dark side. And more than a dozen local authors are telling you all about it . . . Together, in Denver Noir, these authors pen a diverse look at the underside of Denver."
--Denver Post

"This anthology of short fictional crime and suspense stories written by 14 local authors and edited by Cynthia Swanson tells hair-raising, spine-tingling tales set in Denver's unique neighborhoods. Follow felons down Colfax, solve a murder mystery and root for runaways as you flip through the pages, but be warned--the book's final words may haunt you even after you turn out the lights."
--Denver Life Magazine

"Denver Noir presents an impressive range of perspectives and observations. Between the writers and their characters, you'll encounter dozens of distinct and compelling relationships with this place. Maybe you'll start to see our city--and even yourself--in new ways."
--Denver North Star

"Swanson takes the editorial reign for the Denver book, which features 14 contributions . . . There isn't a clinker in the bunch . . . You'll find a treasure trove of mystery short stories in Denver Noir."
--BookGasm

From the Introduction by Cynthia Swanson:

"Even a city that boasts three hundred days of sunshine a year has its sudden, often violent storms--and writers have long taken advantage of that metaphor. Renowned authors Katherine Anne Porter, Jack Kerouac, Stephen King, Rex Burns, Robert Greer, Michael Connelly, and Kali Fajardo-Anstine--among many others--have brilliantly portrayed this picturesque but often merciless city. Today, Denver is home to a thriving literary scene, with writers of all stripes finding inspiration in its people and streets. The authors and stories featured in Denver Noir are no exception...

"Editing Denver Noir, working with this talented group of writers, has been one of the highlights of my career. Fans of noir and Denver devotees alike, I invite you into this journey of our Mile High City, our home beside the mountains, our capital of sunshine and darkness, optimism and anguish."

Cynthia Swanson writes literary suspense, often using historical settings. Her debut novel, The Bookseller, was a New York Times best seller, an Indie Next selection, and winner of the 2016 WILLA Literary Award for Historical Fiction. Swanson's second novel, the USA Today best seller The Glass Forest, was noted in Forbes as being one of "Five Novels with a Remarkably Strong Sense of Place." She lives with her family in Denver. Find her at cynthiaswansonauthor.com.