Call It What You Want (Hardcover) 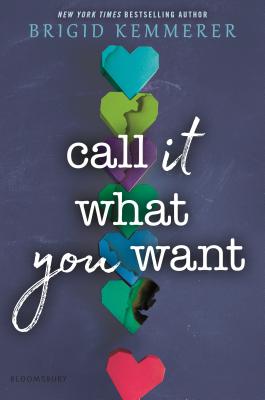 By Brigid Kemmerer
$18.99
On Our Shelves Now

When his dad is caught embezzling funds from half the town, Rob goes from popular lacrosse player to social pariah. Even worse, his father's failed suicide attempt leaves Rob and his mother responsible for his care.

Everyone thinks of Maegan as a typical overachiever, but she has a secret of her own after the pressure got to her last year. And when her sister comes home from college pregnant, keeping it from her parents might be more than she can handle.

When Rob and Maegan are paired together for a calculus project, they're both reluctant to let anyone through the walls they've built. But when Maegan learns of Rob's plan to fix the damage caused by his father, it could ruin more than their fragile new friendship . . .

In her compulsively readable storytelling, Brigid Kemmerer pens another captivating, heartfelt novel that asks the question: Is it okay to do something wrong for the right reasons?

Brigid Kemmerer is the New York Times bestselling author A Curse So Dark and Lonely, More Than We Can Tell, Letters to the Lost, and the Elementals series. She was born in Omaha, Nebraska, though her parents quickly moved her all over the United States, from the desert in Albuquerque, New Mexico, to the lakeside in Cleveland, Ohio, and several stops in between, eventually settling near Annapolis, Maryland.
www.brigidkemmerer.com
@BrigidKemmerer

“Kemmerer has a knack for combining serious family drama with swoony romance.” —BCCB

“Readers looking for a different sort of coming-of-age story or teen protagonists grappling with complex situations will fall in love with this romance-tinged novel.” —Booklist, starred review, on MORE THAN WE CAN TELL

“A must-have for any YA collection. Give to teens who enjoyed A Boy Called It by Dave Pelzer or The Perks of Being a Wallflower by Stephen Chbosky.” —SLJ, starred review, on MORE THAN WE CAN TELL

“Family dysfunction, anxiety, and PTSD from long-term abuse are all believably conveyed. . . A timely, suspenseful, well-written page-turner with compelling main characters.” —Kirkus Reviews on MORE THAN WE CAN TELL

“Readers will find it easy to fall into Rev and Emma's lives as romance hovers between them and they confront the violence of their past and present.” —Publishers Weekly on MORE THAN WE CAN TELL

“The characters are well developed and . . . anticipation and curiosity build throughout.” —School Library Connection on MORE THAN WE CAN TELL

“This book is going to fly off the shelves to all teens, but it will hold special interest for those looking for a tear-jerking romance and serious readers of realistic fiction.” —VOYA on LETTERS TO THE LOST

“A great concept, delivered in a compulsively readable package . . . romance readers will stay up late to finish this very satisfying and heartfelt read.” —Booklist on LETTERS TO THE LOST

“Explores the ideas of carving identity out of pain and the way perception colors expectations.” —BCCB on LETTERS TO THE LOST

“Readers will find themselves rooting for the real Declan to win Juliet's heart the same way his online persona did. Consider this tale of modern star-crossed love as a first purchase for YA collections.” —SLJ on LETTERS TO THE LOST