The Color Inside a Melon (Paperback) 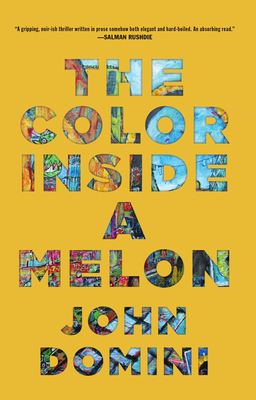 "The narrative has its requisite share of mobsters, cops and bloodshed, but for Domini these are mainly pegs upon which to explore Risto's sense of displacement and belonging. ... Domini's novel is determined to push the noir--and us--out of well-worn ruts." --The Washington Post
A disastrous earthquake has Naples reeling. While the government scrambles to maintain appearances, poverty and anarchy rack the people on Italy's margins--the illegal immigrants out of Africa, known as the clandestini. One of whom has just been horrifically murdered.

Enter Risto, a rare success story: a refugee from Mogadishu, orphaned in his teens, he's now married the Neapolitan Paola and is the proprietor of a celebrated art gallery. The murder recalls the deaths of his loved ones years ago in Mogadishu, a trauma Risto can't outrun.

Thinking to force the hand of the white authorities, Risto begins his own investigation. But once he starts playing detective, he quickly gets in over his head. Worse, his digging seems to have brought on a strange hallucination: a golden halo only he can see, like a visionary's foretelling of death. Everyone he knows, including the woman he loves, seems to brim with secrets; every discovery Risto makes drives him toward an earthquake of his own.

A portrait of turmoil inside and out, The Color Inside a Melon explores race and class, belonging and exclusion in one of the world's ancient cities. Prolific author, critic, and essayist John Domini delivers an unforgettable portrait of humanity's endless struggle between moving on and making a home.