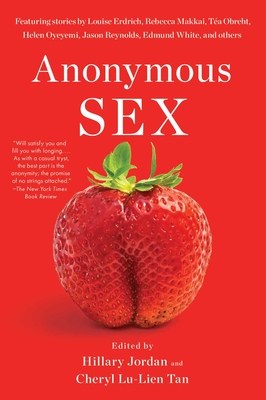 
On Our Shelves Now
27 Authors. 27 Stories. No Names Attached.

A bold collection of stories about sex that leaves you guessing who wrote what.

While the authors are listed in alphabetical order at the beginning of the book, none of the stories are attributed, providing readers with a glimpse into an uninhibited landscape of sexuality as explored by twenty-seven of today’s finest authors.

Cheryl Lu-Lien Tan is author of the international bestsellers Sarong Party Girls and A Tiger in the Kitchen: A Memoir of Food and Family. She is also the editor of the fiction anthology Singapore Noir. Cheryl was a staff writer at The Wall Street Journal, InStyle, and The Baltimore Sun, and her stories and reviews have also appeared in The New York Times, Times Literary Supplement, The Paris Review, The Washington Post, and Bon Appetit, among others. Born and raised in Singapore, she lives in New York City.
“A wild and varied romp into all kinds of sexual tales and fantasies. . . . this is a book you'll wanna keep on your bedside table." —Refinery 29

“The stories will satisfy you and fill you with longing. . . . as with a casual tryst, the best part of this book is the anonymity; the promise of no strings attached.” —New York Times Book Review

"An intoxicating combination of tension and release, not to mention artistry.” —San Francisco Chronicle

“There’s funny sex, revenge sex and senior sex, and tales of obsession, dominance and love. It’s hard to say what’s more entertaining: the guessing game or the stories themselves.” —TIME

“An early contender for the steamiest book of the year.” —PopSugar

"The writers of these steamy stories kiss but don’t tell." —Washington Post

"An anthology in the form of a parlor game, Anonymous Sex invites readers into the imaginations of some our best novelists, letting us marvel at their talents and desires while wondering who wrote what and if it even matters. A book of pleasures and secrets—and great fun to read." —David Ebershoff, author of The Danish Girl and The 19th Wife