Lords of the Ice Moons: A Scientific Novel (Science and Fiction) (Paperback) 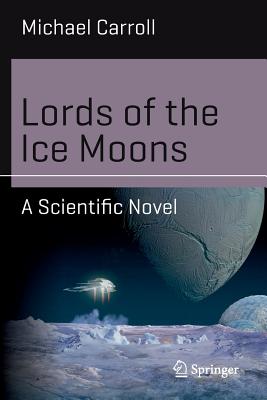 By Michael Carroll
$19.99
On Our Shelves Now

What happens with something becomes someone?
In the aftermath of an asteroid impact, Earth's power grid is damaged nearly beyond recovery. The survival of our world may well depend on energy sources collected from an abandoned undersea settlement beneath the icy surface of Enceladus. Earth-raised Colonel Carter Rhodes, in charge of Earth's recovery efforts, calls upon Gwen Bar , a Venusian engineer, to regain control of the deserted moon outpost and collect fuel for Earth's collapsing power grids.
However, what Gwen discovers churning in Enceladus's subsurface waters brings her and Colonel Rhodes' straightforward plans to a crashing halt. Soon, Gwen finds herself in the middle of an interplanetary standoff. Win, and give the last humans on Earth a chance to survive. Lose, and risk the permanent dismantling of human society across the Solar System. Forced to take sides in this war for power, resources, and species survival, Gwen must make choices that not only affect her own life, but also force her to question what "life" itself might really mean.
Will the promise of Enceladus energy be enough to salvage what is left of Earth's society?
Are these humans worthy of salvation?.

Author/artist Michael Carroll has spent decades as a science journalist and even longer as an astronomical artist. He received the AAS Division of Planetary Science's Jonathan Eberhart Award for the best planetary science feature article of 2012. He lectures extensively in concert with his various books, and has done invited talks at science museums, aerospace facilities, and NASA centers. He has written articles and books on topics ranging from space to archeology. His articles and art have appeared in TIME, National Geographic, Scientific American, Smithsonian, Popular Science, Astronomy, Sky and Telescope, Astronomy Now (UK), and a host of children's books and magazines. Among his most recent twenty-some books are Springer's Europa's Lost Expedition and Antarctica: Earth's Own Ice World. One of his paintings is on the surface of Mars--in digital form--aboard the Phoenix lander. In 2006, he received the Lucien Rudaux Award for lifetime achievement in the Astronomical Arts. He is a Fellow and founding member of the International Association of Astronomical Artists.